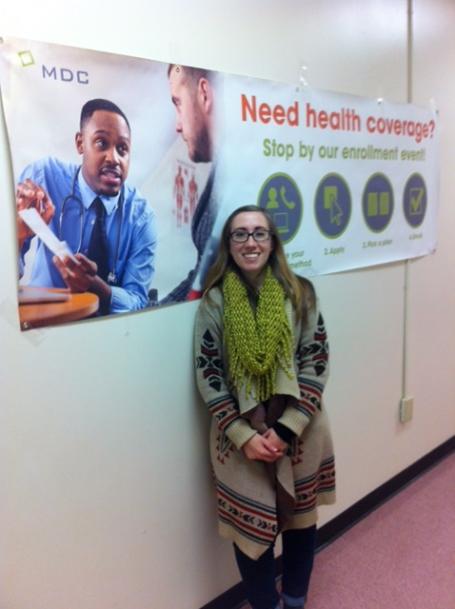 MDC co-founded the North Carolina Navigator Consortium, which helped the state outperform its projections for the share of successful enrollments into health insurance plans offered through the Health Insurance Marketplace, as part of the Affordable Care Act. MDC sponsored federally-certified Health Care Navigators for five years, from 2013 to 2018.

BUILDING THE CAPACITY of the nonprofit sector to connect families with these new resources became urgent in early 2013. This is when the State of North Carolina reversed course and decided not to sponsor a state-based health insurance exchange—resulting in the loss of millions of dollars in federal funding for outreach and enrollment. To contribute toward building the nonprofit civic infrastructure needed for effective ACA health insurance outreach and enrollment across North Carolina, MDC drew upon its staff experience with The Benefit Bank® of North Carolina to engage in a broad array of activities, including:

MDC focused in the Navigator initiative on designing and building partnerships with public and nonprofit organizations in the Research Triangle region to conduct ACA outreach and enrollment activities for consumers not yet reached and enrolled. Our partnerships include those with Durham County Public Schools, Dress for Success, Project Access, and TROSA.

From 2013 to 2018, MDC’s Health Care Navigators enrolled 751 households into Affordable Care Act (ACA) or Medicaid health insurance worth more than $5.2 million. The North Carolina Navigator Consortium has continued to help the state outperform its projections for the share of successful enrollments into health insurance plans offered through the Health Insurance Marketplace. The impact on households from receiving health insurance and financial assistance are greater than just the numbers. Research and practice show that expanding health insurance coverage improves health outcomes and reduces patient medical debt and hospital uncompensated care costs.