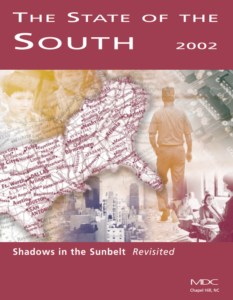 While several metropolitan areas have burgeoned and some rural communities have made a successful economic transition, economic shadows have darkened in many Southern rural and urban places that have no distinctive competitive advantages in today's economy, according to a panel of distinguished Southerners convened by MDC.

The State of the South 2002,  fourth in the biennial series, revisits MDC's groundbreaking 1986 report, Shadows in the Sunbelt, and offers recommendations to spread economic progress into the region's shadows.

Funded by the Ford Foundation