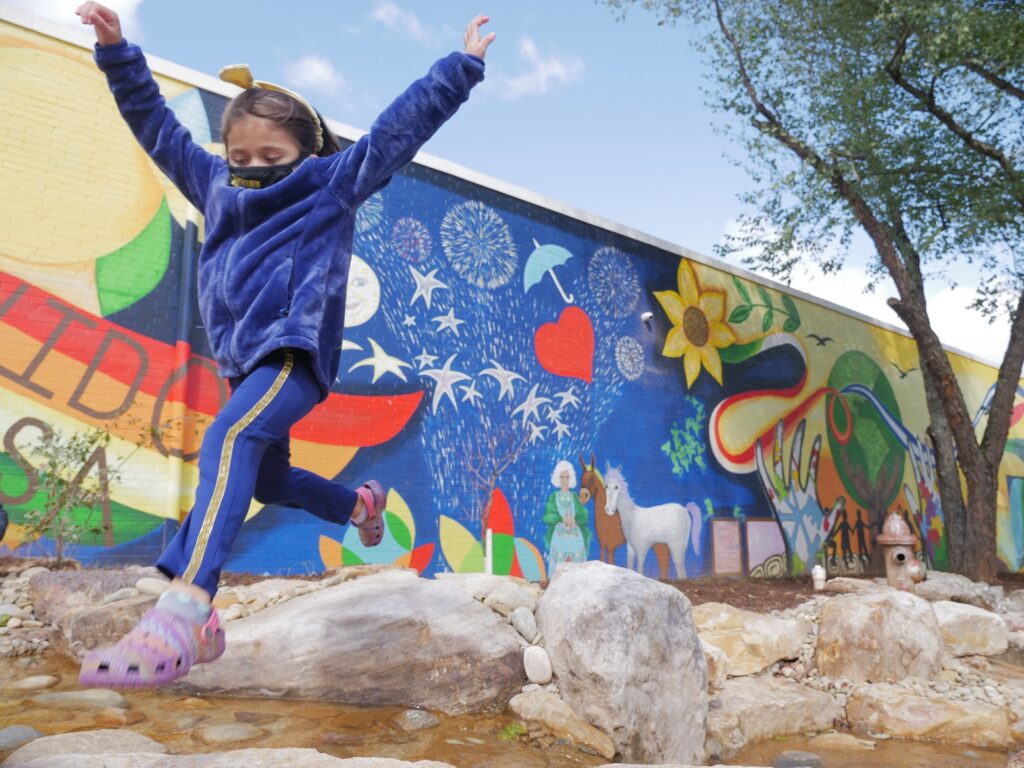 Many clients had already told Smith, who heads El Futuro, an organization providing mental health services to immigrant families in Durham, N.C., that they came from rural areas with creeks, rivers, and rolling landscapes. He knew moving to the city often exacerbated parents’ anxieties and their children’s transition. And then, there was the pandemic.

So Smith, who’s a child and adolescent psychiatrist by training, was inspired by community feedback: build a rolling landscape with a fast-running stream, climbing rocks, and tiny waterfalls next to El Futuro’s offices in an old shopping center and a magnificent mural that says “Bienvenidos a Casa” (Welcome Home). It would be a place for children to play while parents met with doctors and counselors, and where families from neighboring apartment complexes could safely and distantly play outside.

“This is a country crowd,” Smith says. “They don’t refer to themselves as ‘Latinx’ or even ‘Latino,’ but instead as Mexican or Honduran, or the specific state they are from, which is often a small town or village. We asked what home was like, and we wanted to create a therapeutic place where they could have a visceral experience—pumping water, milking a cow, just like when they were in the country, in ‘mi pueblo.’”

Now, children and their parents are hopping across rocks, chasing their toy boats as they travel downstream, and stopping to sit down with their feet in the water and just relax.

The idea wasn’t cheap, and the board took some convincing, Smith says. “This is upstream thinking for us around mental health. We’re going out on a limb here, but it’s completely worthwhile though it isn’t seen as a valid, Western approach.”

Organizations like El Futuro are working across North Carolina to address the challenges of the families of young people with all kinds of learning differences. The stream idea may not be right for other organizations, but until now there was nothing connecting them to share and work together on all kinds of innovative ideas.

That’s why Oak Foundation and MDC created Learning for Equity: A Network for Solutions (or LENS-NC). El Futuro is one of nine participants in the network, which is bringing together organizations large and small, focused on education, disability rights, activism, Latino issues, and rural communities, to advance their work at the intersection of race, educational equity, and learning differences.

Learn about the nine participating organizations

Oak Foundation has committed over $1.4 million to the 18-month initiative, in which participating organizations are receiving grants to advance their work to improve the lives of the one-in-five children who struggle with learning and attention issues, and the less than favorable outcomes for the ones who are low-income students and students of color.

“This work at the intersection of race, educational equity, and learning differences is occurring at a pivotal time in history, when there are numerous discussions about justice and equity in our communities,” said MDC Program Director Stephanie Walker, who is heading LENS NC. “Organizations in the Network have forged new alliances based on the discovery of intersecting strategies uncovered while participating in the network. As the Network continues its work, even more opportunities for partnership and connection will emerge, and a key next step is to consider shared, collective action. We are excited about the possibilities.”

That means, for instance, that sitting across the table (virtually, for now) from the N.C. State Board of Education is the grassroots Education Justice Alliance (EJA)—which is organizing parents in Raleigh, particularly among Black and Brown working class people, to make their needs and ideas heard in the education system, particularly regarding disparities in funding, suspension, discipline, and academic failure.

“It’s a space that allows us to build that connectedness to organizations that have greater resources, and greater reach, to help inform our work,” says Letha Muhammad, director of EJA. “We have two staff and a lot less of a budget than a lot of the folks at the table. So that’s one of the big benefits for us, not just receiving, but our ability to name and center our community as experts in their experience and the need to include their voices in any equitable change.”

For El Futuro, LENS NC gave Smith’s team the opportunity to work more closely with Jenice Ramirez, executive director of the Chapel Hill-based nonprofit Immersion for Spanish Language Acquisition (ISLA). ISLA works with low-income, Spanish-speaking students to gain literacy skills in their native language, and with their families to connect and navigate the education system. It also is dedicated to creating and connecting communities through Spanish-language and cultural immersion programs for the non-Spanish-speaking community.

“Our parents needed to know they deserved a seat at the table,” Ramirez says. “They needed to know that our education system, our schools, need to see you because, culturally, we’re told you listen to superiors, you listen to the people in charge, because they know better. Our parents don’t know what their rights are, and more importantly, how to add those tools to their toolbox to say I have the right to ask for an interpreter, I have the right to observe in a classroom.”

At the same time, El Futuro was putting together a program for parents with a focus on empowering their voices in the school system. Smith quickly invited Ramirez to be on its advisory group, which also included mentoring organizations (including Student U in Durham, another LENS NC participant) and people from the Durham and Chatham public school systems who were working with Latino children.

“We found that ISLA’s program is dovetailing with ours,” Smith said. “It’s really so cool. We’re prepping these parents so that when the advisory group is helping us to understand all the nuances around treatment, service delivery, support for families, and interface with schools, we can say to school systems, ‘Here’s what you have to do to support these kids.’”

Says Ramirez: “I’m a fairly new person in the nonprofit world, and the hardest thing is networking. LENS has allowed us to do that. With LENS, Luke and I were able to hear about each other’s projects and see the correlation. When you’re doing something new, being innovative, there’s a feeling of loneliness. Their work is really going to help us support our families, and vice versa.”

LENS also has brought stronger voices and deeper understanding to government and policymakers through the Education Justice Alliance, which is working to connect policymakers with the needs of the community on issues such as technology use, counseling, and the financial difficulties families are having.

“We’re figuring out how to synchronize our work and make it even deeper, thinking about policy,” says Muhammad, who is having side conversations with other participants, such as James Ford at the Center for Racial Equity in Education, another LENS participant. “Parents weren’t aware of how policies were affecting them at the local level. We’re trying to build up their understanding of the impact of those policies. With knowledge comes power, and then you can begin supporting the policies that impact you and your children and their schools.”

And LENS has allowed organizations a chance to look beyond their urgent missions, put their feet in the proverbial stream, and think and reflect with others.

“LENS has given us the economic freedom and breathing space to step back and dream a little bit—and not be afraid to mess up,” Smith says. “We can’t find model programs for doing this. It’s groundbreaking and very exciting, and I say this as someone who has worked on this for more than 20 years.”