DURHAM, N.C. – John L.S. Simpkins, a constitutional law scholar and former Obama Administration counsel who has played a leadership role in advancing an equity agenda for women and people of color in the South, was selected by the MDC Board to be the organization’s next president. He succeeds David L. Dodson, who is retiring June 30 after 21 years as President. 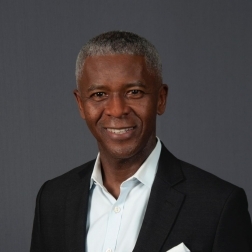 ce President of Aspen Global Leadership Network at the Aspen Institute, where he has advanced programs that support collaborative dialogue and cross-sector problem-solving in pursuit of addressing some of society’s most vexing challenges. Currently, he is working on the organizational response to the COVID-19 pandemic and mobilizing over 3,000 of the program’s Fellows around the globe to match resources to needs for Fellows and their communities.

“The South is a place of promise, but it has a past that it still hasn’t fully reckoned with,” said Simpkins, who grew up in South Carolina. “The opportunity to come back and work within the entire region is one that I found to be very powerful. I can’t think of a better way to go back to where I was planted than with MDC—a ‘think tank with muddy boots’ that’s committed to equity and economic mobility. Because at this moment, equity and economic mobility are essential for driving the South into the post-COVID world.”

MDC is a Durham-based nonprofit spun off in 1967 from N.C. Gov. Terry Sanford’s landmark anti-poverty program, the North Carolina Fund, that equips Southern leaders, institutions, and communities to improve economic mobility and advance equity. It brings together foundations, nonprofits, and leaders from government, business, and the grassroots to illuminate data that highlight deeply rooted Southern challenges and help them find systemic, local solutions.

MDC’s approach uses research, consensus-building, and programs that connect education, employment, and economic security to help communities foster prosperity by creating an “infrastructure of opportunity”—the aligned systems and supports that can boost everyone, particularly those who’ve been left behind, to higher rungs on the economic ladder. MDC’s landmark State of the South reports have shaped the economic agenda of the region since 1996, shining a spotlight on historic trends, deep-rooted inequities, and solutions that offer rural and urban communities a path forward. MDC is supported by grants and contracts from foundations, government, and the private sector.

Simpkins grew up in Lexington, S.C., outside Columbia, and has played a leadership role in advancing women and people of color in the state. He was Associate Director of the Richard Riley Institute at Furman University, where he focused on youth leadership, public school education practice and policy, and linking community and business leaders. He also was director of diversity initiatives at the Charleston School of Law and a regular panelist in events for the S.C. League of Women Voters. After leaving the Obama Administration, he was an executive with Prisma Health in Greenville, S.C, where he led collaborative, evidence-based efforts to promote health innovation, access, and equity. While serving in this role, Simpkins facilitated conversations in Spartanburg, S.C., after the release of community data on racial equity.

Simpkins received his AB in government from Harvard College and a JD and LLM in international and comparative law from Duke University School of Law. He is a Senior Lecturer at Duke Law School. He also is a member of the Liberty Fellowship, a program in the Aspen Global Leadership Network dedicated to moving South Carolina forward.

“I knew we needed a leader who would get proximate to the issues, listen intently to the opportunities, and act responsibly as they moved the organization forward,” said Darrin Goss Sr., chair of the MDC Board of Directors. “I am happy to say that with John, we found such a leader.”

MDC Board member Leslie Winner, who headed the search committee, said Simpkins “really understands the importance of an intermediary in building capacity in communities to frame their own equity agendas and have the capacity to implement them. He gets that both from the community and philanthropic sides.”

Simpkins replaces Dodson, who has been at the nonprofit for 33 years and was selected as president following the death of MDC’s founding President, George Autry. Dodson led MDC through major, national work such as the Ford Foundation’s Rural Community College Initiative and managing the creation and incubation of the nation’s largest community college reform organization, Achieving the Dream.

“Every transition is an opportunity for continuity and change,” Dodson said, “and I think John will bring his continuous commitment to the South and fresh perspective and ideas to MDC. I’m excited to be able to hand over the reins to him.”

Dodson has led place-based initiatives across the South to address stalled economic mobility and build leadership on issues including rural development, community college reform, and postsecondary attainment. He has co-written MDC’s State of the South reports and co-created, with Senior Fellow Joan Lipsitz, MDC’s “Passing Gear Philanthropy” practice, which focuses philanthropic investments on the upstream causes of social disparities and has guided grantmakers to redirect more than $1 billion in assets.

For a PDF of the news release, click here.