An MDC board member says ensuring that economic growth includes everyone is an infrastructure issue and bemoans the competition between communities to lure companies when most jobs come from small and medium-sized businesses. 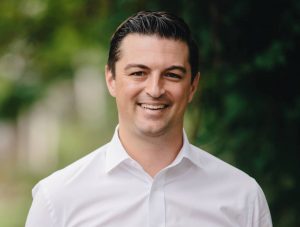 MDC board member Amir Farokhi says ensuring that economic growth includes everyone is an infrastructure issue and bemoans the competition between communities to lure companies when most jobs come from small and medium-sized businesses.

Farokhi speaks with MDC News about how his work aligns with MDC’s mission to create a South where all people thrive.

Farokhi joined the MDC board in 2018. He is director of the Corporate Council at CARE USA and serves on the Atlanta City Council. He has served as a Director of Strategy at Boston Consulting Group’s BrightHouse division; Chief Operating Officer of College Advising Corps, an education non-profit; founder and Executive Director of Georgia Forward; and, as an attorney with an international law firm.

A graduate of Duke University and Duke University School of Law, he was a 2011 Marshall Memorial Fellow and Term Member with the Council on Foreign Relations. He lives in Atlanta with his wife, their dog, and two cats.

How did you learn about MDC?

My introduction to MDC came from the State of the South reports. I’ve always wanted to grab them and read them because I’m a native of the South—on the one hand I’m a ninth generation Georgian, on the other hand I’m the son of an immigrant. The South is in many ways the last part of America that has a distinct culture and set of practices and challenges. And it’s the history that makes those challenges maybe tougher to overcome than other parts of the country. The State of the South report and MDC’s work hones in on that uniqueness that the South presents, both bad and glorious.

How does your work fit with MDC’s?

I’ve had a bit of a nonlinear past, and each of the chapters lends itself to some use for MDC. I founded and ran a public policy nonprofit in Georgia that was called Georgia Forward that sought to bridge the urban/rural divide and to engage business, government, and civil society to be more collaborative and long-term in how they thought about the state’s future, similar to the work that the Institute for Emerging Issues does in North Carolina. I spent time working with companies on their purpose, and why do they exist, and how do you use that to sharpen strategy and communicate what you’re doing to the world. And I’m a recovering lawyer, which always has some utility.

What have you learned in those roles that lends itself to the issues that MDC addresses? How do you make this connection between economic growth that leaves people behind and the steps we can take to ensure that economic growth includes everyone?

This is the question that all civic-minded leaders are grappling with, because it’s not just a housing question, not just an education question. It’s as much an infrastructure question—do you have access to transportation? What’s the proximity you have to good schools? It’s how integrated are the neighborhoods. It’s a whole host of things that go as much to zoning policy as to the quality of your public schools.

I think we find ourselves in this Sisyphean challenge of not just cities competing against one another to lure outside businesses and people, but you have counties within the same metro area poaching from each other. And in that process you’re doling out all these incentives and tax breaks that otherwise would be funds that could be deployed in the community in a number of ways—streets and sidewalks, education, public safety, a whole host of innovative social service approaches that don’t see the light of day because they’re not funded.

How do you balance this need to attract jobs with the way the game is played, the competition, and not offer incentives when everyone else is doing it?

There will always be incentives unless there’s a federal framework that disincentivizes or penalizes incentives. You mitigate the need to rely on incentives in part by making your slice of the South an attractive a place to live for people who are already there. Because people and the places they work for want to be where their people want to be. So that means investing in all the things that make living a fruitful life possible instead of just saying, oh, if we attract this big Fortune 500 company to move their offices here, I’ll get re-elected. It’s much bigger than that. It requires cities to be a little more farsighted than short-sighted. But I think you can mitigate the need for incentives in part by just building really great communities in which to live.

How do we make it so the people who live here are able to compete for those jobs?

Even that requires some political backbone. In the recruitment process, if you’re going to be in the game of recruiting outside companies to your city or state, which pretty much every city and state is in, you have to have the political backbone to say we will give you certain incentives to come here, but in exchange for that, you need to do your part to integrate local people into your business in a significant way. And it goes better if you can integrate the higher education system and technical college system into the ecosystem that’s created by the company that’s moved there, whether it’s a white collar job center or a manufacturing center.

In Georgia, much like North Carolina and South Carolina, we see this with manufacturing facilities and tech companies. The film industry has really set up shop in Georgia, largely on tax benefits. But a lot of the higher paying jobs are still being held by folks who are flying in from California or New York. And there’s a big push to say, hey, if this industry’s here to stay for the foreseeable future, why aren’t we putting more of our younger folks into sustainable careers that the film industry produces? And I think government has to play a role in making sure that’s the expectation if you’re going to take advantage of the incentives to be there.